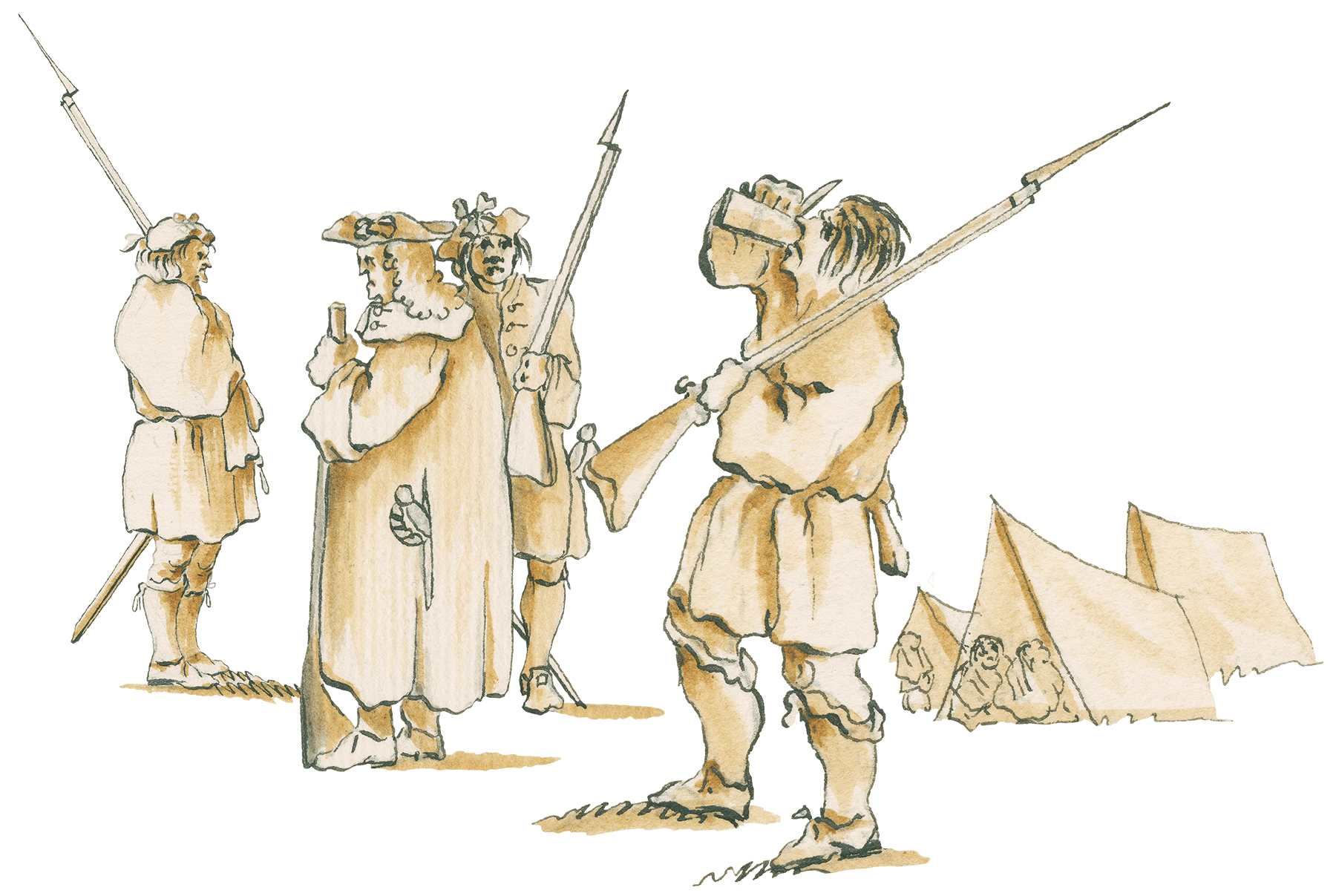 Surveying a variety of texts and images produced in the wake of the Jacobite risings, this section explores their role in determining how the terrible violence of the recent past was understood and remembered.

The recurrent Jacobite military threat dominating the first half of the 18th century meant that many of the earliest contemporary accounts of Scotland were associated with military activity.

Following the defeat of the Jacobites at Culloden in 1746, the massive road and bridge-building programme initiated by the government in the 1720s intensified. Primarily designed to allow troops to reach all parts of Scotland, it also opened the country to travellers, commerce and ultimately tourists.

This programme was complemented by the commissioning of a Military Survey of North Britain or ‘Great Map’, as it was known to contemporaries, executed between 1747 and 1755.

The maps and drawings generated by, or under the supervision of, its principal surveyor William Roy and chief draughtsman Paul Sandby were crucial. Motivated by a desire to take control of the land, they also led to a better understanding of the landscape and influenced how the conflict would be remembered and understood.

In the following decades, the Military Survey facilitated the first wave of written and pictorial descriptions capturing the character of Scotland, past and present.

The Military Survey of Scotland was a ground-breaking project. It involved teams of engineers surveying Scotland as part of a military reconnaissance programme, very much in response to the ’45 Jacobite rising. One of its outputs is the hand-drawn map known as the ‘Great Map’ that consists of 22 rolls, each measuring roughly 70 by 300 centimetres. According to its chief surveyor, William Roy, the map was more a “magnificent military sketch, than a very accurate map of the country”. A considerable achievement, it provides a unique snapshot of the entire Scottish mainland as its landscape was about to undergo rapid changes.

The works gathered in this section either present Scotland as it was seen through the eyes of men associated with the army or commemorative pieces. They also hint at how what had been a war zone just 30 or so years previously would by the beginning of the 1770s be well on its way to becoming a popular scenic destination.

Sandby and Clerk of Eldin: The Military Draughtsman and the Amateur Artist

As chief draughtsman to the Military Survey in Scotland, Paul Sandby arrived in Edinburgh in 1747. Over the next five years, his acquaintance with William Adam, master mason to the Board of Ordnance, brought him in close contact with Edinburgh artistic circles, including John Clerk of Eldin. A young amateur artist, Clerk was destined to become a successful merchant and author whose achievements span the arts and sciences. The two men were of similar age and soon became firm friends.

In the early 1750s Clerk accompanied Sandby on several sketching trips around Scotland – some carried out when the latter was off duty, others when he was working on the military survey. A formative influence on Clerk’s later activities as a draughtsman and as a printmaker, as the prints and drawings dotted throughout this exhibition illustrate, these travels nurtured their skills as landscape artists, open to all facets of their subjects, from the picturesque to the military, or features of the natural world.