Edinburgh Castle from the Grassmarket 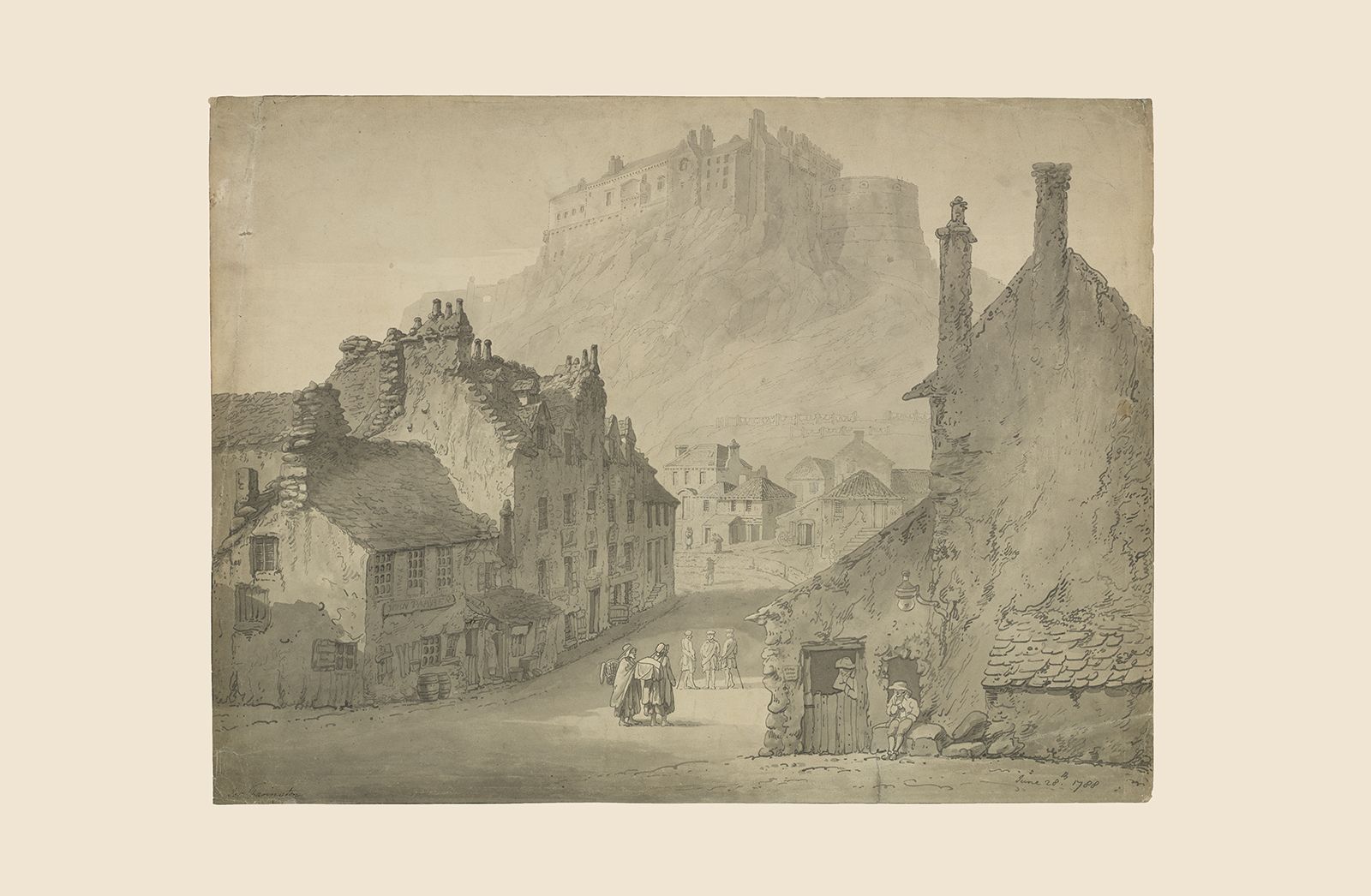 By the late 18th century, numerous artists were travelling to Scotland to capitalise on the rising taste for Scottish scenery and ancient monuments. Usually commissioned by a print publisher, they would follow the established itineraries of noteworthy objects and places. Made on a 1788 summer tour, Farington’s prospect of Edinburgh Castle looks up from the decrepit-looking buildings of the Grassmarket. Following established pictorial convention, it mixes the ordinary and the epic, contrasting a scene of everyday life against a backdrop of historic architecture.

In depth text by John Bonehill

Tour dates: 1788, 1792 and 1801
“The Mountains, – The Lakes, - The Glens, The Waterfalls in this Country, may be spoken of as all that one who is in search of the Sublime, and the beautiful, would wish for, … . the whole together of what this Country affords is sufficient to justify the strongest recommendation of it to the notice of all lovers of what is remarkable & picturesque” (Farington 1978-84, V, 1687).

Training in the studio of Richard Wilson, Farington was a landscape specialist, active in the London art world he detailed in his now famous diary for the best part of half a century. Like others in this line, his life was punctuated by regular sketching tours throughout Britain, usually searching out subjects at the behest of print publishers such as John and Josiah Boydell.

One such venture, a projected but ultimately abandoned History of the principal rivers of Great Britain, took Farington to Scotland for this first time in 1788 and again four years later, to make sketches of scenery along the Clyde and Forth. On the journey of 1792, Farington recorded his observations on the topography in written and pictorial form, making notes on local economies and land use as well as the etymology and social customs of the places he visited.

The artist returned to Scotland in the autumn of 1801, spending some three months travelling in the company of his good friend, the wine dealer Charles Offley, his wife Anne and her cousin, the accomplished amateur artist Frances Waring. Unlike the first two journeys, which were undertaken for professional reasons, this third journey was distinctly sociable, made principally for the good of Farington’s health. He still sketched, however, often with his companions alongside, taking lessons and maintained his diary, making notes this time on the weather or the food, the merits or otherwise of the hotels and guesthouses where the party stayed, along with a running tally of expenses incurred.